Here’s how to stop your ISP from spying on you. One change in browsers like Firefox or Chrome makes it much harder for your internet service provider, or anyone else, to see where you go online: The federal government has authorized your internet service provider to spy on you. The right was enshrined by a 2017 act of Congress that cancelled anti-spying regulations enacted by the Obama-era Federal Communications Commission. Today, your ISP can log every place you go online and use that data any way it wants, such as building user profiles for its own or other companies’ advertising platforms. FastCompany, October 24, 2019

10 Tips to Avoid Leaving Tracks Around the Internet: Google and Facebook collect information about us and then sell that data to advertisers. Websites deposit invisible “cookies” onto our computers and then record where we go online. Even our own government has been known to track us. The New York Times, October 4, 2019

From Nicki Minaj to Anna Kendrick, these are the celebrities who are the most dangerous to search for online: Nearly two decades have passed since the infamous Anna Kournikova virus swept the internet, but the names of celebrities are still being used to trick internet users into giving away their information. BusinessInsider, October 26, 2019

Analysis of different authentication needs and means. Most of the time you want MFA. Private/Public Encryption is Sometimes a Better Option: Keybase exists to keep things safe online. And it doesn’t use 2FA to do it. Wired, October 25, 2019 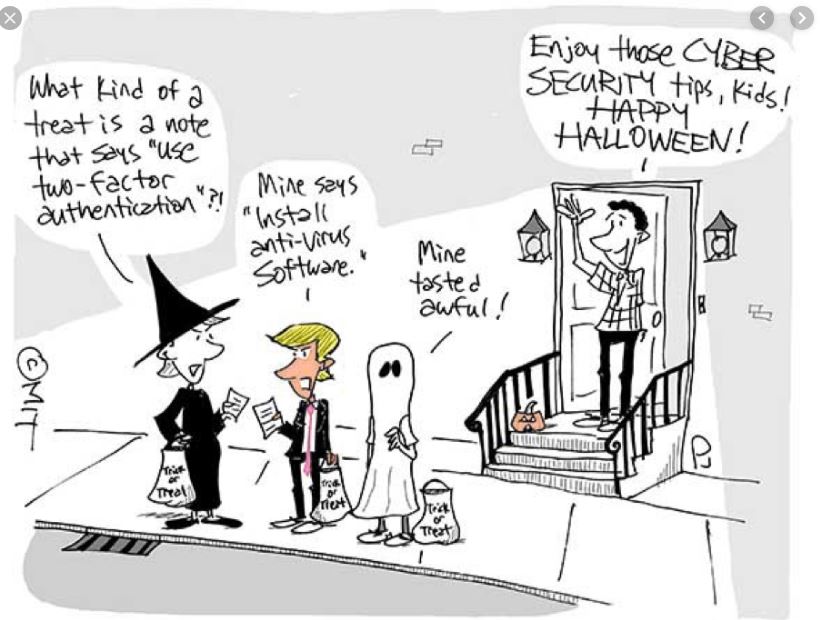 Building a Cybersecurity Culture: What’s Love Got to Do With It?: Turns out, a lot. Get people to fall in love with the security team, and you’ll get them to care about security, CISOs say in this second installment of a two-part series. DarkReading, October 25, 2019

Cyber insurance companies look for new ways to avoid paying claims. AIG Is the Latest Insurer to Back Away from Cyber Insurance Coverage: There is a growing precedent within the global insurance industry for insurers to back away from their cyber insurance policies, usually in the face of potentially massive losses. The latest insurance company to dispute the legal definition of terms included in its cyber insurance policies is insurance giant AIG, which is disputing a breach of contract lawsuit filed in August in the Southern District of New York. The company says its cyber insurance plans do not cover “criminal acts,” which is the way that it is characterizing a cyber incident involving nearly $6 million in losses at multi-billion-dollar financial technology company SS&C Technologies. As a result, the insurance giant wants the lawsuit tossed. CPO, October 24, 2019

The Cybersecurity 202: Here’s what keeps British cybersecurity officials up at night: Criminals are developing more sophisticated ways to dupe unsuspecting victims online, including by posing as representatives of law firms, fire and emergency services, and airports, according to a new report from the United Kingdom’s cyber defense agency. The Washington Post, October 25, 2019

Exclusive: White House cyber memo warns of new network risks as many cybersecurity officials have resigned: An internal memo on cybersecurity, obtained by Axios, warns that “the White House is posturing itself to be electronically compromised once again.” AXIOS, October 24, 2019

TikTok Called a ‘Potential Counterintelligence Threat,’ by Bipartisan Duo of Senators: The Chinese-owned video application TikTok may be a national security threat to the U.S. and should be investigated, two key senators said in a letter to the acting director of national intelligence. Fortune, October 24, 2019

Here’s where U.S. cyber warriors are working to protect against election threats: The U.S. government’s actions to disrupt Russia’s attempted cyber incursions into the 2018 midterm elections took place in part in a newly constructed Joint Operations Center (JOC) on the National Security Agency’s expanding Fort Meade campus in Maryland. Efforts to protect the 2020 elections are expected to follow a similar drill. CBS, October 24, 2019

Ransomware Hits B2B Payments Firm Billtrust: Business-to-business payments provider Billtrust is still recovering from a ransomware attack that began last week. The company said it is in the final stages of bringing all of its systems back online from backups. KrebsOnSecurity, October 22, 2019

Inside the Phone Company Secretly Run By Drug Traffickers: Crime blogger Martin Kok was assassinated while leaving a sex club. It turned out MPC, one of his clients, was not an ordinary phone company. Motherboard, October 22, 2019

When minutes count, study suggests hospitals see an increase in heart attacks being fatal correlated with time delays resulting from increased cybersecurity controls: Imagine a scenario where you have a medical emergency, you head to the hospital, and it is shut down. On a Friday morning in September, this hypothetical became a reality for a community in northeast Wyoming. PBS, October 24, 2019

Facebook trained AI to fool facial recognition systems, and it works on live video: Facebook remains embroiled in a multibillion-dollar judgement lawsuit over its facial recognition practices, but that hasn’t stopped its artificial intelligence research division from developing technology to combat the very misdeeds of which the company is accused. According to VentureBeat, Facebook AI Research (FAIR) has developed a state-of-the-art “de-identification” system that works on video, including even live video. It works by altering key facial features of a video subject in real time using machine learning, to trick a facial recognition system into improperly identifying the subject. The Verge, October 25, 2019