I Visited 47 Sites. Hundreds of Trackers Followed Me: Earlier this year, an editor working on The Times’s Privacy Project asked me whether I’d be interested in having all my digital activity tracked, examined in meticulous detail and then published — you know, for journalism. “Hahaha,” I said, and then I think I made an “at least buy me dinner first” joke, but it turned out he was serious. What could I say? I’m new here, I like to help, and, conveniently, I have nothing whatsoever at all to hide. The New York Times, August 23, 2019

Hi, Alexa. How Do I Stop You From Listening In On Me?: Humans help train artificial intelligence, so someone may be listening to what you tell Siri, Google Assistant or Alexa. Here’s what to do if you have a problem with that. The New York Times, August 22, 2019

This couple fought $25,000 in fraudulent credit-card charges after falling prey to identity theft — then things got even worse: Amy Wang and her husband spent hundreds of hours trying to straighten out their financial futures after falling prey to identity theft. Now she wants other would-be victims to learn from her experience. MarketWatch, August 24, 2019

14 Simple Strategies For Consumers To Avoid Cybercrime: In the past, many consumers considered that only businesses would be at risk of cybercrime. However, today’s cybercriminals target both businesses and individuals without restraint. Each time you log on to the internet or use some form of connected banking, you are exposing yourself to potential cybercrime. Forbes, August 23, 2019

Forced Password Reset? Check Your Assumptions: Almost weekly now I hear from an indignant reader who suspects a data breach at a Web site they frequent that has just asked the reader to reset their password. Further investigation almost invariably reveals that the password reset demand was not the result of a breach but rather the site’s efforts to identify customers who are reusing passwords from other sites that have already been hacked. KrebsOnSecurity, August 21, 2019

Take these 5 critical steps to protect yourself from cybercrime: High-profile data breaches at companies like British Airways and Marriott get a lot of media coverage, but cybercriminals are increasingly going after community groups, schools, small businesses, and municipal governments. Just in the Midwest, hospitals, libraries, voter registration systems, and police departments have fallen victim to one type of digital hijacking or another. Fast Company, August 17, 2019

Hackers are actively trying to steal passwords from two widely used VPNs: Got Fortigate or Pulse Secure? Now would be a good time to make sure they’re patched. ars technica, August 24, 2019 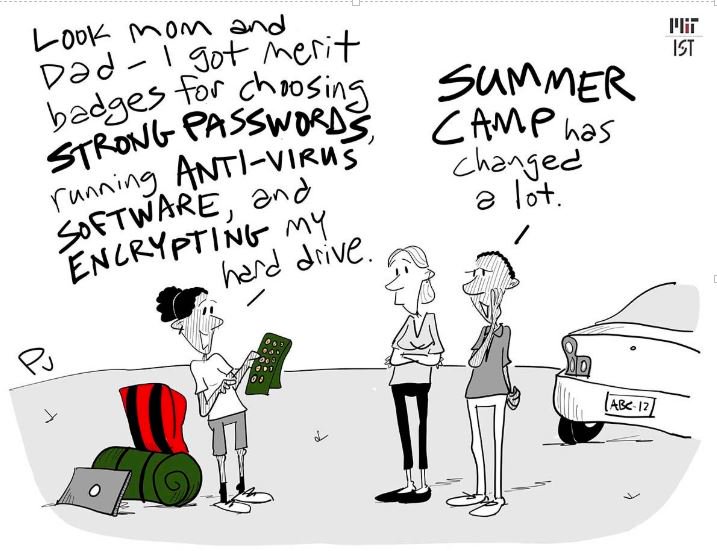 Cloud Security: Mess It Up and It’s on You: Jay Heiser of Gartner Says the Cloud Demands New Security Processes, Tools. BankInfoSecurity, August 22, 2019

How to Hire and Retain More Cybersecurity Professionals: The shortage of qualified IT security pros is well known, so businesses that want them need a creative approach. BizTech, August 21, 2019

5 Indicted in Identity Theft Scheme That Bilked Millions From Veterans: The defendants obtained Social Security numbers and bank account information from a technician who worked for the military, the Justice Department said. The New York Times, August 23, 2019

Feds Charge 80 People Over Massive Online Fraud Conspiracy: A Japanese woman met a person online in March 2016 who said he was a U.S. Army captain based in Syria. NPR, August 23, 2019

The Rise of “Bulletproof” Residential Networks: Cybercrooks increasingly are anonymizing their malicious traffic by routing it through residential broadband and wireless data connections. Traditionally, those connections have been mainly hacked computers, mobile phones, or home routers. But this story is about so-called “bulletproof residential VPN services” that appear to be built by purchasing or otherwise acquiring discrete chunks of Internet addresses from some of the world’s largest ISPs and mobile data providers. KrebsOnSecurity, August 19, 2019

CISA Chief Unveils Vision for Federal Cybersecurity: The Homeland Security Department’s cyber chief on Thursday countered the notion that every civilian agency should be responsible for managing their own digital risks and said federal leaders are considering ways to centralize those operations. NextGov, August 22, 2019

A Major Cyber Attack Could Be Just as Deadly as Nuclear Weapons, Says Scientist: People around the world may be worried about nuclear tensions rising, but I think they’re missing the fact that a major cyberattack could be just as damaging – and hackers are already laying the groundwork. Science Alert, August 18, 2019

We must treat cybersecurity as a public good. Here’s why: Soon your fridge will be able to buy your food on Amazon, having noticed what you liked on Facebook and Instagram. Cybersecurity is crucial for this to happen; to make sure that, while our food preferences are being noted, our identity is not stolen, credit cards not cloned, and our devices are not tampered with by malicious actors out to steal data or modify a machine’s behaviour. As the Fourth Industrial Revolution progresses and the integration and interaction of different technologies is used to improve individual and environmental wellbeing, cybersecurity will be ever more important. World Economic Forum, August 22, 2019

When Ransomware Cripples a City, Who’s to Blame? This I.T. Chief Is Fighting Back: Brian A. Hawkins Googles his name and last employer and winces. The New York Times, August 22, 2019

Ransomware Attacks Are Testing Resolve of Cities Across America: HOUSTON — At the public library in Wilmer, Tex., books were checked out not with the beeps of bar code readers but with the scratches of pen on notebook paper. Out on the street, police officers were literally writing tickets — by hand. When the entire computer network that keeps the small town’s bureaucracy afloat was recently hacked, Wilmer was thrown into the digital Dark Ages. The New York Times, August 22, 2019

Ransomware attacks are an expensive threat to city and state governments. They won’t ebb anytime soon: Hackers have scored big payoffs to unlock email, phones and public records across the country. The Washington Post, August 20, 2019

California Passed the Country’s First Law to Prevent Genetic Biohacking: Genetic engineering technologies are quickly becoming mature and cheap enough for people to start using them in their own homes. That’s got scientists and officials worried, and California has now passed the first bill aimed at restricting the sale of home gene therapy kits. Singularity Hub, August 19, 2019

For the C-Suite: Managing Your Company’s Information Security & Privacy Risk
Culver City Chamber of Commerce
August 29 @ 8:00 am – 11:30 am