The clever cryptography behind Apple’s “Find My” feature: You can track down your stolen MacBook, but no one else can—not even Apple. ars technica, June 6, 2019

Apple snuck an awesome privacy feature into iOS 13 and no one noticed: When Apple unveiled iOS 13 earlier this week, the company focused a lot on user privacy. Perhaps the biggest new privacy feature coming to iOS 13 is the company’s “Sign in with Apple” single sign-on. Yet the company also unveiled other new privacy features like end-to-end encrypted home security camera storage and improved protections against apps always knowing your location. Fast Company, June 6, 2019

FCC Encourages Carriers to Offer Robocall Blocking: Your phone company may start blocking robocalls without your needing to ask for it. NPR, June 26, 2019

Windows 10 version 1903 now available to anyone who checks for an update: The Windows 10 May Update, which is version 1903, is now available for anyone that manually updates their PC. All you need to do is click “Check for updates” in the Settings app of your Windows 10 device. The status of the latest major Windows Update is outlined by Microsoft in a recently updated doc. Windows Central, June 7, 2019

Windows 10 passwords won’t expire: Why Microsoft says this will make your account safer: Changing passwords frequently is not only a pain, but also unsafe, according to Microsoft. Here’s why the company’s decision to remove password expirations is a good one. TechRepublic, June 6, 2019 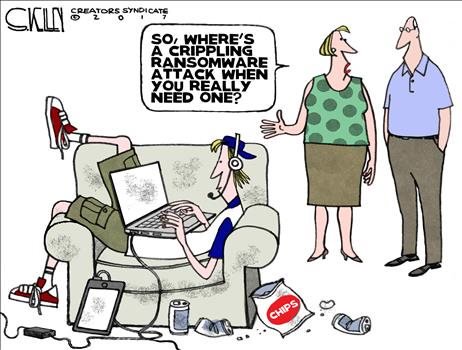 In Such Transformative Times, the CISO Is Key to Delivering Digital Trust: For organizations today, staying competitive means undergoing rapid digital transformation, yet few appear to have a solid approach for handling the security and privacy implications of such a change. However, ensuring organizations adapt while also retaining a high level of digital trust is exactly where the chief information security officer (CISO) can help. CISOs are adept at reviewing the security of digital crown jewels — sensitive, business-critical data — aligning security to business goals, and ensuring that disruptive technologies such as artificial intelligence (AI), internet of things (IoT) devices and augmented reality are adopted with adequate security and privacy controls. Security Intelligence, April 18, 2019

What’s the best approach to patching vulnerabilities?: New research shows that most vulnerabilities aren’t exploited and those that are tend to have a high CVSS score (awarded on the basis of how dangerous and easy to exploit the vulnerability is). So, not surprisingly, the most easily exploited flaws are the ones exploited most frequently. NakedSecurity, June 7, 2019

How To Respond To A Cybersecurity Threat In 4 Steps: As more business becomes digital and data governs more of our lives, cybersecurity incidents are climbing in frequency, intensity and innovation. It’s a struggle to safeguard sensitive information and protect the trust of customers and partners. No organization can insulate against every risk, but being ready to respond quickly to a potential threat or active breach can make a huge difference in the scope of damage and long-term aftermath. Forbes, June 7, 2019

The Windows RDP bug is actually a feature, confirms Microsoft: According to Security researchers, the Windows 1903 Update has a nasty bug in the Network Level Authentication (NLA) that can allow attackers to take control of the remote sessions. MS PowerUser, June 7, 2019

CERT Coordination Center: Microsoft Windows RDP can bypass the Windows lock screen. Advice: (i) Disable RDP Automatic Reconnection on RDP servers (ii) Protect access to RDP client systems (iii) Disconnect RDP sessions instead of locking them: In Windows a session can be locked, which presents the user with a screen that requires authentication to continue using the session. Session locking can happen over RDP in the same way that a local session can be locked. CERT, June 6, 2019

Cybersecurity Recruiting: Weigh Your Options To Find The Right Strategy: For chief information security officers (CISOs), finding cybersecurity talent is difficult and expensive. It can seem like the greater the need, the less available the talent is. That’s why I believe the most powerful weapon in a seasoned CISO’s arsenal is, hands down, a security-focused recruiter. Domini Clark, Forbes, June 6, 2019

Report: No ‘Eternal Blue’ Exploit Found in Baltimore City Ransomware: For almost the past month, key computer systems serving the government of Baltimore, Md. have been held hostage by a ransomware strain known as “Robbinhood.” Media publications have cited sources saying the Robbinhood version that hit Baltimore city computers was powered by “Eternal Blue,” a hacking tool developed by the U.S. National Security Agency (NSA) and leaked online in 2017. But new analysis suggests that while Eternal Blue could have been used to spread the infection, the Robbinhood malware itself contains no traces of it. KrebsOnSecurity, June 3, 2019

More than 40,000 Kubernetes and Docker containers discoverable on the internet – with many exposing personal data: Over the past few weeks, a Twitter account that has since been confirmed by researchers to be that of the operator of the ransomware that took down Baltimore City’s networks May 4 has posted taunts of Baltimore City officials and documents demonstrating that at least some data was stolen from a city server. Those documents were posted in response to interactions I had with the ransomware operator in an attempt to confirm that the account was not a prank. ars technica, June 4, 2019

Komodo Hacks Itself and Saves Crypto Worth $13M After Learning of Security Vulnerability: Crypto wallet provider Komodo effectively hacked itself to prevent fraudsters from accessing its users’ funds, the company confirmed in a blog post on June 5. CoinTelegraph, June 6, 2019

Gang charged with $19 million iPhone scam: A gang in New York allegedly spent the past seven years using the ripped-off identities of cellphone subscribers to steal $19 million worth of iPhones, according to a now-unsealed complaint originally filed by federal prosecutors at the end of April 2019. Naked Security, June 6, 2019

Hackers take aim at Fortune 500 companies on the Dark Web: Hackers are increasingly turning to Dark Web marketplaces to buy and sell tools to attack businesses, according to a Thursday Bromium report Into the Web of Profit: Behind the Dark Net Black Mirror. TechRepublic, June 6, 2019

Nation States Must Explain When a Cyber Attack Might Draw a Violent Reprisal: Without clear explanations that affirm rules of the road, countries make it easier for conflicts to spiral out of control. Defense One, June 6, 2019

Election Rules Are an Obstacle to Cybersecurity of Presidential Campaigns: One year out from the 2020 elections, presidential candidates face legal roadblocks to acquiring the tools and assistance necessary to defend against the cyberattacks and disinformation campaigns that plagued the 2016 presidential campaign. The New York Times, June 6, 2019

Online-Privacy Laws Come With a Downside. The European Union tried to protect internet users. It also gave public officials a blunt instrument to wield against journalists.: It was the kind of call a journalist dreams about. Last fall, a tipster contacted the Bucharest-based Rise Project to offer the investigative-journalism outfit a suitcase full of evidence that, the anonymous source assured, implicated a high-powered Romanian politician in a massive fraud. The reporters pounced. The Atlantic, June 3, 2019

How a Google Cloud Catch-22 Broke the Internet: FIVE DAYS AGO, the internet had a conniption. In broad patches around the globe, YouTube sputtered. Shopify stores shut down. Snapchat blinked out. And millions of people couldn’t access their Gmail accounts. The disruptions all stemmed from Google Cloud, which suffered a prolonged outage—which also prevented Google engineers from pushing a fix. And so, for an entire afternoon and into the night, the internet was stuck in a crippling ouroboros: Google couldn’t fix its cloud, because Google’s cloud was broken. Wired, June 7, 2019