In Stores, Secret Surveillance Tracks Your Every Move: Imagine you are shopping in your favorite grocery store. As you approach the dairy aisle, you are sent a push notification in your phone: “10 percent off your favorite yogurt! Click here to redeem your coupon.” You considered buying yogurt on your last trip to the store, but you decided against it. How did your phone know? The New York Times, June 14, 2019

We Read 150 Privacy Policies. They Were an Incomprehensible Disaster: In the background here are several privacy policies from major tech and media platforms. Like most privacy policies, they’re verbose and full of legal jargon — and opaquely establish companies’ justifications for collecting and selling your data. The data market has become the engine of the internet, and these privacy policies we agree to but don’t fully understand help fuel it. The New York Times, June 12, 2019

Essay; Peeping Tom Lives by William Safire. Written in 1993. Applicable Today: When President William Jefferson Clinton is briefed by the Secret Service about the security available to him, he will be shown a “secure” scrambler telephone on which he can talk to other heads of government. The New York Times, January 4, 1993

Thanks to Equifax breach, 4 US agencies don’t properly verify your data, GAO finds: The agencies rely on an outdated verification method with an increased risk of identity theft, the Government Accountability Office says. CNet, June 14, 2019

Medical information of more than 20 million patients for sale online as result of breach of healthcare billing vendor AMCA: A security breach at American Medical Collection Agency (AMCA), a provider of billing services for the US healthcare sector, has now exposed the personal and financial information of over 20 million Americans, possibly more. ZDNet, June 14, 2019

How to freeze your credit to prevent fraud or identity theft: A credit freeze prevents credit bureaus from sharing your credit report with any person or lender without your permission. Business Insider, June 14, 2019

Citadel & SecureTheVillage President Stan Stahl discusses First American Financial Corp data exposure and why it’s important to freeze your credit. Sunday Morning Newsmakers with Larry Marino: There are reports that First American Financial Corporation exposed close to a billion digitized mortgage documents containing highly personal information. Dr. Stahl discusses the difference between a leak and a breach, how the leak likely occurred, how CCPA might apply if this occurs after 1/1/2020, the importance of freezing one’s credit, and other credit management matters. Sunday Morning Newsmakers, June 9, 2019

Microsoft Patch Tuesday, June 2019 Edition: Microsoft on Tuesday released updates to fix 88 security vulnerabilities in its Windows operating systems and related software. The most dangerous of these include four flaws for which there is already exploit code available. There’s also a scary bug affecting all versions of Microsoft Office that can be triggered by a malicious link or attachment. And of course Adobe has its customary monthly security update for Flash Player. KrebsOnSecurity, June 12, 2019 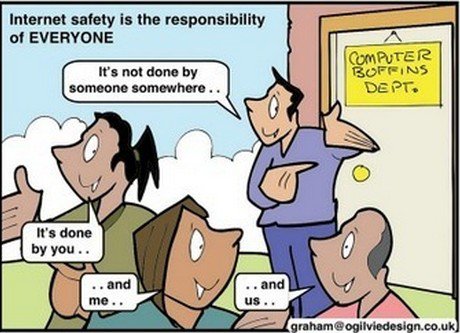 Can’t Pass the Buck: Boards Must Take Charge Charge of Enterprise Cybersecurity: Research shows that four in five American companies have been the target of an attempted systems hack. That’s an astonishingly high number. These attacks aren’t taking place because businesses are not investing in cybersecurity products and services. Far from it, companies were projected to splurge more than $90 billion on IT security products in 2018 according to a Gartner research. Yet somehow, this enormous spend isn’t necessarily translating to fewer attacks. That’s in large part due to the weak or absent direction and oversight of enterprise cybersecurity at the organization’s highest level. Companies are faced with a dearth of context and direction. Many businesses don’t have clarity on how secure they should be, what amount of risk is acceptable, and what they are ready to spend to lower risk to an acceptable level. TechGenix, June 14, 2019

CISO do’s and don’ts for board reporting: Security is no longer just a job for IT – it impacts all areas of a business, from brand perception to the bottom line. As a result, CISOs are increasingly being asked to deliver cybersecurity reports to their boards, including information on global trends, security performance, security strategy, and security spend. HelpNetSecurity, June 13, 2019

CCPA and Minimum Reasonable Security Procedures and Practices: A Floor on “Defendability”: Given the financial exposure of a breach, the prudent business will want to ensure it can be defended against a claim that it has failed to implement appropriate reasonable security procedures and practices. Since it is a breach that will trigger consumer action, special attention should be put on defensive strategies that significantly lower the likelihood of a breach. Citadel Information Group, June 12, 2019

Identity Is Not The New Cybersecurity Perimeter — It’s The Very Core: As businesses increasingly move mission-critical operations into the cloud, the need for more — and better — cybersecurity is growing, fast . To put it into perspective, cloud adoption has grown by an astounding 130% over the past decade, with $175 billion spent in 2018. Meanwhile, cybersecurity spending has likewise reached unprecedented levels, eclipsing $100 billion. Forbes, June 14, 2019

Whitepaper: Maturing a Threat Intelligence Program: Whether you are getting started with TI or seeking to expand an existing program, the Threat Intelligence Maturity Model provides a systematic guide to help you understand where your organization resides on the path to a mature threat intelligence program and how it can better apply threat intelligence to drive smarter security processes, unite all resources behind a common defense, and take decisive action to keep your business on course. HelpNetSecurity, June 13, 2019

Zero Trust: The Modern Approach To Cybersecurity: Security strategy begins with an attitude: Never trust, always verify. The conventional notion of the enterprise perimeter—imagining it as one big bubble to be protected—is now thoroughly outdated in a world where infiltration can be accomplished via a staggering number of devices and applications, either already in the network or soon to join it. Forbes, June 12, 2019

The CBP’s Subcontractor Breach Illustrates The Cyber Dangers Of Data Ecosystems: Earlier today the US Customs and Border Protection Agency acknowledged a massive data breach suffered by one of its contractors that resulted in unauthorized access to photographs and license plate details of those crossing US borders. The CBP’s own networks were not breached. Instead one of its subcontractors had quietly copied the data to its own servers without CBP’s knowledge and against CBP policy. It was that subcontractor’s networks that were subsequently compromised, resulting in the exposure of the data. While much is still unknown about the extent of the breach and who executed it, one of the biggest takeaways is that for all their investments in their own cybersecurity, the massive data supply chains that support large organizations can offer back doors to their most valuable data. Forbes, June 10, 2019

Tomorrow’s Cybersecurity Analyst Is Not Who You Think: Organizations can’t just rely on diverse and cutting-edge technologies to fight adversaries. They will also need people with diverse expertise and backgrounds. Dark Reading, June 12, 2019

Cybersecurity giant Symantec plays down unreported breach of test data: Hacker accessed passwords and list of purported clients, including Australian government agencies – but company says these were only demonstration accounts. The Guardian, June 13, 2019

Border Agency’s Images of Travelers Stolen in Hack: WASHINGTON — Tens of thousands of images of travelers and license plates stored by the Customs and Border Protection agency have been stolen in a digital breach, officials said Monday, prompting renewed questions about how the federal government secures and shares personal data. The New York Times, June 10, 2019

Better Cybersecurity Research Requires More Data Sharing: Researchers at the Workshop on the Economics of Information Security highlight the cost savings of sharing cybersecurity data and push for greater access to information on breaches, attacks, and incidents.DarkReading, June 14, 2019

The Cybersecurity 202: Get ready for the hacking back debate: Round 2: A bipartisan bill being reintroduced this morning would allow hacked companies to turn the tables and hack back into their attackers’ computer networks. The Washington Post, June 13, 2019

This former Chinese hacker used USB sticks to steal data from hotel guests and then sold it on a popular freelancing site: Bo Chou, now working somewhere else in Asia, says he feels like his past life was boring. He’s had no interest, he says, in regaling people with tales of his time as a hacker for China’s People’s Liberation Army. (Some names, locations and personal details have been changed to protect confidential sources.) CNBC, June 12, 2019

The Highly Dangerous ‘Triton’ Hackers Have Probed the US Grid: ON THE SCALE of security threats, hackers scanning potential targets for vulnerabilities might seem to rank rather low. But when it’s the same hackers who previously executed one of the most reckless cyberattacks in history—one that could have easily turned destructive or even lethal—that reconnaissance has a more foreboding edge. Especially when the target of their scanning is the US power grid. Wired, June 14, 2019

AI Has Made Video Surveillance Automated and Terrifying: AI can flag people based on their clothing or behavior, identify people’s emotions, and find people who are acting “unusual.” Schneier on Security, June 13, 2019

The Cybersecurity 202: Even a voting machine company is pushing for election security legislation: A major voting machine vendor reversed course Friday and urged Congress to pass legislation mandating paper trails for all votes as an anti-hacking protection. The Washington Post, June 10 2019

Cellebrite Says It Can Unlock Any iPhone for Cops: NOT SO LONG ago, companies that cracked personal devices on behalf of governments did so in secret, closely guarding even the descriptions of their capabilities. Now, it seems, they proudly tweet about their updated abilities to hack into new iPhones, like a videogame firm offering an expansion pack. Wired, June 14, 2019

Algorithms Won’t Fix What’s Wrong With YouTube: What seems like a sensible decision to an algorithm can be a terrible misstep to a human. The New York Times, June 14, 2019