‘It’s time for us to watch them’: App lets you spy on Alexa and the rest of your smart devices: It’s no secret that our increasingly “smart” houses have become a rich source of data for companies. We know — in a general sense, anyway — that we are sacrificing some privacy for the sake of convenience. CBC, April 25, 2019

Phone Companies Are Testing Tech to Catch Spam Calls. Let’s Hope It Works: A new standard, called Stir/Shaken, could come to your mobile provider by the end of the year. But there are already ways around it. The New York Times, April 26, 2019

You Can’t Stop Robocalls. You Shouldn’t Have To: Today’s solutions for fighting spam and scam calls are ineffective. But the onus should be on the phone companies, not you, to solve this problem. The New York Times, April 25, 2019

Devious Chase Bank Phishing Scam Asks For Selfies: A new phishing scam targeting Chase bank customers has been discovered that not only asks you for your personal information, but also requests that you upload a selfie of yourself holding your ID or driver license. BleepingComputer, April 25, 2019 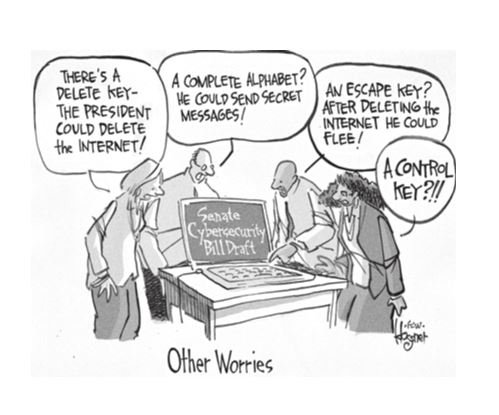 Why shadow IT is the next looming cybersecurity threat. … It’s also a challenge for GDPR, CCPA, and other privacy laws: Shadow IT is an issue that just about every organization faces on some level, but when I speak to executives and IT leaders, it’s simply not a topic that comes up. When I do bring it up, it quickly becomes clear that the tech industry as a whole underestimates the size and scope of the issue. And that lack of awareness and understanding is posing an ever-increasing threat to data protection and cybersecurity. The Next Web, April 25, 2019

The Fundamentals Behind Hacking: MIT Technology Review’s Martin Giles discusses what business leaders and consumers need to know about the latest trends in cyber attacks and how to handle that next inevitable data breach: The rise in ransomware incidents; hacking attacks and data breaches have become a scary reality for organizations and individuals worldwide. Increasingly, the issue of cyber security and what organizations need to do to better protect their people and their systems now sit at the top of the priority list for business leaders. MIT Technology Review, April 25, 2019

Five Possible Ways You Did Not See That Data Breach Coming: In late January, millions of financial records were leaked from Texas-based data firm Ascension because its contractor, a New York-based document management startup, had misconfigured several Elasticsearch and Amazon S3 storage servers, leaving them with no password required. ITSP, April 16, 2019 … Is Your IT Vendor / MSP Effectively Protecting You? Citadel can help.

The Best Way to Avoid Data Leaks and Privacy Scandals: Don’t Own Consumer Data. … New “Privacy-by-Design” Technologies Are Pointing the Way: The GDPR launched in May 2018 and has triggered demand for legal clones across the world. California now has the California Consumer Privacy Act (CCPA). The European Union’s Competition Commissioner, Margrethe Vestager, says we should start regulating data access more directly. Wyoming just passed a law making digital assets legally recognized as personal property. Australia, Brazil, and many other nations are also hopping on the trend. The law is coming for tech companies, and it’s not coming quietly. Even Mark Zuckerberg has begun to step out to speak about regulation, putting regulators in a position where they need to respond. Forbes, April 24, 2019

Browser threats are as serious as phishing or ransomware. Businesses need to understand how to defend against these threats: Many organisations have close to no visibility into their web-facing assets. They are also, generally speaking, clueless about how people use these assets. Obviously, this is something hackers know and are willing to exploit. As a matter of fact, they have already done it with great success, and it’s only going to get worse before it gets any better. ITProPortal, April 25, 2019

Password1, Password2, Password3 no more: Microsoft drops password expiration recommendation. Encourages use of MultiFactor Authentication (MFA): For many years, Microsoft has published a security baseline configuration: a set of system policies that are a reasonable default for a typical organization. This configuration may be sufficient for some companies, and it represents a good starting point for those corporations that need something stricter. While most of the settings have been unproblematic, one particular decision has long drawn the ire of end-users and helpdesks alike: a 60-day password expiration policy that forces a password change every two months. That reality is no longer: the latest draft for the baseline configuration for Windows 10 version 1903 and Windows Server version 1903 drops this tedious requirement. ars technica, April 25, 2019 … MFA is a Citadel Standard

An argument for individual “right of compensation” as in CA’s new Consumer Privacy Act (CCPA) as FTC gives two companies a slap on the wrist after “appalling hacks”: The US Federal Trade Commission has agreed to settle two legal cases against two companies that suffered catastrophic hacks in 2016. ZDNet, April 25, 2019

If a $5 Billion Fine Is Chump Change, How Do You Punish Facebook?: A trivial fine would mean the government isn’t just deferential to Facebook, but that it doesn’t truly understand its power. The New York Times, April 26, 2019

Big business is poking holes in California’s landmark privacy law: When it goes into effect next year, the California Consumer Privacy Act will be the nation’s strongest privacy law, with the aim of giving Californians more control over their personal privacy in the fashion of the European Union’s widely heralded General Data Protection Regulation. But privacy advocates say that it does so without crucial provisions that would actually restrict the sharing of personal data and provide consumers the ability to sue companies when they violate people’s privacy. Fast Company, April 25, 2019

Canada Says Facebook Broke Privacy Laws With ‘Superficial’ Safeguards In Cambridge Analytica Scandal and Has Ignored Recommendations Since: Facebook’s weak privacy protections exposed the personal data of millions of users, a serious failing that the company has acknowledged but refused to fix, Canadian regulators said on Thursday. The New York Times, April 25, 2019

Cybercriminals are becoming more methodical and adaptive: Cybercriminals are deviating towards a more focused approach against targets by using better obfuscation techniques and improved social engineering skills as organizations improve in areas such as time to detection and response to threats, according to Trustwave. HelpNetSecurity, April 26, 2019

Trojanized TeamViewer Attacks Reveal Mutating Malware: A string of recent attacks against several embassies shows how even small changes in source code can complicate the fight against malware. In this case, a weaponized version of commonly used remote access software successfully infected the embassies’ systems, according to Check Point Research. BankInfoSecurity, April 26, 2019

The Anatomy of Highly Profitable Credential Stuffing Attacks: Even though credential stuffing is a popular method used by hacking groups to attack businesses since at least late 2014, there still is a lot to be uncovered about the techniques malicious actors use to run them. BleepingComputer, April 25, 2019 … To mitigate the risk, Citadel recommends: 1. Use different passwords for different logins. 2. Turn on MultiFactor Authentication (MFA)

F.B.I. Warns of Russian Interference in 2020 Race and Boosts Counterintelligence Operations: The F.B.I. director warned anew on Friday about Russia’s continued meddling in American elections, calling it a “significant counterintelligence threat.” The bureau has shifted additional agents and analysts to shore up defenses against foreign interference, according to a senior F.B.I. official. The New York Times, April 26, 2019

Russian Hackers Were ‘In a Position’ to Alter Florida Voter Rolls, Rubio Confirms: It was the day before the 2016 presidential election, and at the Volusia County elections office, near Florida’s Space Coast, workers were so busy that they had fallen behind on their correspondence. The New York Times, April 26, 2019

Toward an Information Operations Kill Chain: Cyberattacks don’t magically happen; they involve a series of steps. And far from being helpless, defenders can disrupt the attack at any of those steps. This framing has led to something called the “cybersecurity kill chain”: a way of thinking about cyber defense in terms of disrupting the attacker’s process. Schneier on Security, April 24, 2019

Naming and shaming nations that launch cyberattacks does work, say intel chiefs: Western countries are increasingly calling out malicious cyber activity by other nation states, and this naming and shaming can deter attacks and spur potential victims into improving their security planning, according to intelligence chiefs. ZDNet, April 26, 2019