Amazon Workers Are Listening to What You Tell Alexa. A global team reviews audio clips in an effort to help the voice-activated assistant respond to commands: Tens of millions of people use smart speakers and their voice software to play games, find music or trawl for trivia. Millions more are reluctant to invite the devices and their powerful microphones into their homes out of concern that someone might be listening. Bloomberg, April 10, 2019

How to stop robocalls spamming your phone: No matter what your politics, beliefs, or even your sports team, we can all agree on one thing: robocalls are the scourge of modern times. Techcrunch, April 10, 2019

Verizon has issued a firmware update to patch three flaws in routers that the company supplies to new customers of its Fios service: One of the flaws gives attackers way to gain root access to devices, Tenable says. Dark Reading, April 9, 2019

Cybersecurity Experts: Securing #IoT Devices on IoT Day: Today is IoT Day! On this day, we celebrate the power and potential of Internet of Things (IoT) devices to revolutionize our business processes. Research giant Gartner predicts IoT devices shall number over 20 billion globally by next year. Solutions Review, April 9, 2019

Cybercriminals Spoof Major Accounting and Payroll Firms in Tax Season Malware Campaigns: It’s tax season in the U.S., which means one thing for cybercriminals: opportunity. While the deadline for filing is April 15, tax season stretches on for months beforehand, starting from the time businesses prepare employee payroll information such as W-2 forms. This gives cybercriminals plenty of time to launch campaigns in the hopes of ensnaring individuals and businesses in their various tax fraud, financial fraud and identity theft schemes. SecurityIntelligence April 8, 2019 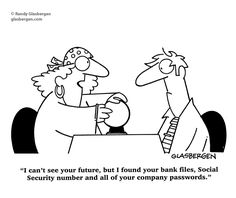 Six Information Security Management Questions for the Chief Executive: What data or information do you have that—if stolen, changed, destroyed, or otherwise compromised—would negatively impact your bottom-line, your competitive position, or put you in legal jeopardy? Executive Guide, Citadel Information Group, April 9, 2019

Forget Russia, China And Iran, Up To 80% Of Cybersecurity Threats Are Closer To Home: According to reports this week, the theft of more than $15 million from UniCredit in China came to light late last year, when cybersecurity loopholes were exploited to access clients’ money. “UniCredit regrets this incident and apologizes to those affected,” said a spokesperson. “The safety and security of our clients’ assets is our primary concern and all efforts have been made to ensure that a similar malicious incident cannot reoccur.” Forbes, April 11, 2019

Are The New York Cybersecurity Regulations The U.S. Equivalent Of GDPR? … Not quite; but legal operations folks need to pay attention, particularly with respect to third-parties: Two years ago, New York’s Department of Financial Services (DFS), which regulates companies in the financial services industry, promulgated regulations in an effort to establish minimum cybersecurity requirements for companies that do business in New York (see 23 NYCRR 500 or click here). AboveTheLaw, April 9, 2019

5 Cybersecurity Myths Banks — and other organizations — Should Stop Believing: In his 2019 letter to shareholders, JPMorgan Chase’s CEO Jamie Dimon wrote: The threat of cyber security may very well be the biggest threat to the U.S. financial system.” This isn’t news to bankers. In Cornerstone Advisors’ annual What’s Going On in Banking study, cybersecurity has been a top concern of C-level bank and credit union execs for the past few years. Forbes, April 8, 2019

Security Think Tank: Incident response vital to guard against catastrophic cyber attack: When it comes to cyber attacks, enterprises have traditionally focused security controls around prevention. Naturally, prevention is the first objective, but recognising that 100% prevention is impossible, security controls in the detection and response groups are receiving increasing consideration. ComputerWeekly, April 8,

Stop Looking for the Purple Squirrel: What’s Wrong With Today’s Cybersecurity Hiring Practices: It is entirely possible, even probable, that the cybersecurity skills gap is, at least partly, something of our own making: our fixation with purple squirrels. Most employers want them and spend weeks, months—even years—looking for purple squirrels to fill critical cybersecurity roles. The problem with this approach is, of course, that they do not exist. And, while organizations are searching for purple squirrels, they are passing over the red, gray, tree or flying squirrels, many of which are not only more common—expanding the sea of candidates—but might be exactly the right squirrel for the job. ISACA, 2019

THE PRIVACY PROJECT. How Capitalism Betrayed Privacy. The forces of wealth creation once fostered the right to be left alone. But that has changed: For much of human history, what we now call “privacy” was better known as being rich. Privacy, like wealth, was something that most people had little or none of. Farmers, slaves and serfs resided in simple dwellings, usually with other people, sometimes even sharing space with animals. They had no expectation that a meaningful part of their lives would be unwatchable or otherwise off limits to others. That would have required homes with private rooms. And only rich people had those. The New York Times, April 10, 2019

TajMahal cyber-espionage campaign uses previously unseen malicious tools. Malware’s new techniques include stealing documents sent to print, stealing files burned to a CD, and more – and it isn’t linked to any known threat actor: A newly discovered form of malware deployed as part of a highly stealthy cyber-espionage campaign comes with several new malicious functionalities. It appears to be the work of a completely new operation, with no known links to any known threat actors or hacking groups. ZDNet, April 10, 2019

Cybercrime groups raise the bar for security teams by borrowing APT techniques: For the past several years, an increasing number of cyberecrime groups have adopted techniques and procedures traditionally used by state-sponsored actors. This trend has caught many organizations unprepared, especially small and medium-sized businesses whose defenses are generally focused on regular malware. CSO, April 10, 2019

A Year Later, Cybercrime Groups Still Rampant on Facebook: Almost exactly one year ago, KrebsOnSecurity reported that a mere two hours of searching revealed more than 100 Facebook groups with some 300,000 members openly advertising services to support all types of cybercrime, including spam, credit card fraud and identity theft. Facebook responded by deleting those groups. Last week, a similar analysis led to the takedown of 74 cybercrime groups operating openly on Facebook with more than 385,000 members. KrebsOnSecurity, April 8, 2019

Report: FIN6 Shifts From Payment Card Theft to Ransomware. FireEye Finds Cybercrime Group Is Adding LockerGoga, Ryuk Ransomware to Its Arsenal: FIN6, a cybercrime group that has focused on attacking point-of-sale devices to steal credit card numbers, now also is waging ransomware attacks that target businesses with either LockerGoga or Ryuk, according to a new analysis from security firm FireEye. BankInfoSecurity, April 8, 2019

Julian Assange Charged by U.S. With Conspiracy to Hack a Government Computer: WASHINGTON — The United States has charged WikiLeaks founder Julian Assange of conspiring to hack a computer as part of the 2010 release of reams of secret American documents, according to an indictment unsealed Thursday, putting him just one flight away from being in American custody after years of seclusion in the Ecuadorean embassy in London. The New York Times, April 11, 2019

UK Man Gets Six-Year Sentence for Global Ransomware Scheme. Victims Infected When They Clicked on Ads: A 24-year-old man living in England has been sentenced to more than six years in prison for his role in a ransomware scheme that targeted millions of computers across 20 countries, the U.K.’s National Crime Agency announced Tuesday. BankInfoSecurity, April 9, 2019